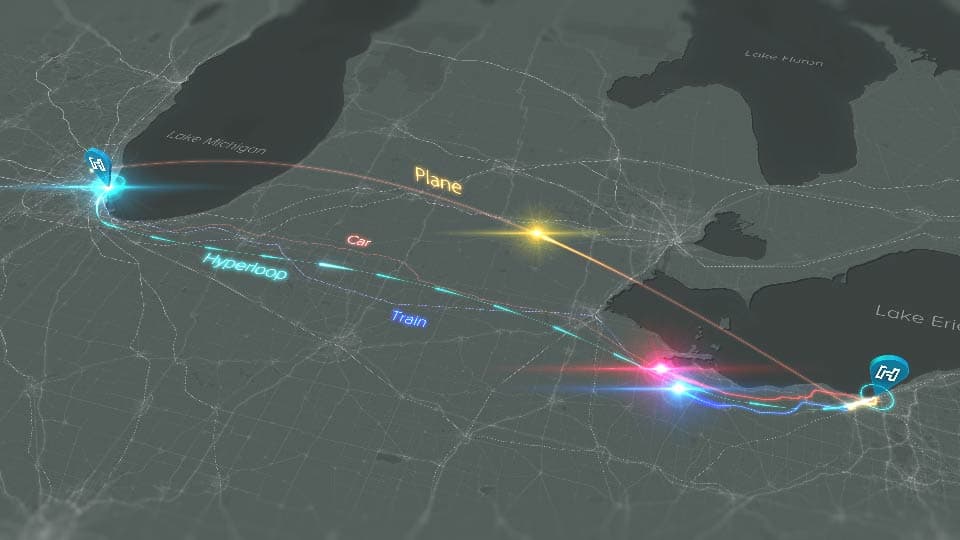 Ito World solves transportation challenges for cities around the world by delivering real-time transit data feeds and data visualisation software. The company was chosen as one of HTT’s contributing partners to create a visualisation that outlines the socio-economic benefits of the first interstate Hyperloop system.

Ito World’s visualisation will help HTT promote Hyperloop as a solution to congestion and pollution, comparing the journey times of Hyperloop versus other current transportation methods. Between Cleveland and Chicago, Hyperloop could transform the travel of 54,720 people a day, reducing travel time from 5.5 hours by car to 28 minutes by Hyperloop, connecting citizens to employment and housing opportunities.

The visualisation was shown for the first time at HTT’s civic event on Monday, attended by dignitaries of Chicago and Cleveland along with senior HTT personnel.

Johan Herrlin, CEO at Ito World, commented on the collaboration:
“We’re at the beginning of a revolution in transportation and Hyperloop Transportation Technologies is at the bleeding edge. We’re excited to be counted as one of their contributing partners, helping to explain the social, economic, and environmental benefits of Hyperloop.”

Craig Taylor, Senior Data Visualisation Design Manager at Ito World, added:
“The Ito World Design Lab’s goal was to create something both informative and captivating to tell Hyperloop’s story. We synthesised population demographics along with drive time catchments to create state-of-the-art visuals that emphasised the advantages of Hyperloop’s vision.”